How the Fungi Got Their Own Kingdom

How the Fungi Got Their Own Kingdom

Once upon a time there were two kingdoms of organisms on planet Earth. An organism is an individual form of life. One was the kingdom of plants. Plants are non-moving life forms. Plants have chlorophyll, the green pigment that gets its energy from the sun in a process called photosynthesis. The other was the kingdom of animals. Animals are moving life forms. They don’t have chlorophyll and have to capture or absorb their foods. Dividing all living organisms into two kingdoms was a very tidy way to classify them. Everyone was ever so happy for ever so long.

Everyone, that is, except the fungi and a few other life forms. Fungi (pronounced FUN-guy) fell into the kingdom of plants. This was not a satisfying fit. Plants were green. Fungi were not. Plants could make their own food by using sunlight. Fungi could not. In many ways, fungi had more in common with animals. Both had to eat to live. Both had cells with similar hard walls. Yet animals could move around. Most fungi could not. Animals looked like animals. Fungi did not. For ever so long, fungi sat at the very bottom — the most primitive place — on the plant classification tree. This tree marked the way plant groups had developed. Fungi sat and watched while students of biology "oohed" and "aahed" over the dramatic beauty of the sunflower and the beautiful complexity of the orchid. Both of those life forms perched on the highest branches of the plant classification tree.

Over time researchers began to use more advanced microscopes. They studied plants and animals in tiny detail. They looked at leaves and stems. They also looked at cells and atoms. They realized that their old system of classification was tidy. Unfortunately, it was not accurate. Fungi were quite distinctive from other life forms. They resembled neither plants nor animals.

Changes occurred. Today when we open up a biology book, we find a very different classification tree. In most books we find a tree with six kingdoms, not two. At the bottom of the tree we find three kingdoms with very strange names (in Latin) — Eubacteria, Archaebacteria, and Protista. On the top there are three equal branches. We find Animalia (animals), Plantae (plants), and Fungi. The fungi kingdom has some 77,000 species. It includes bread molds, yeasts, mushrooms (which tend to be good to eat), and toadstools (which tend to be poisonous).
That is how fungi got their own kingdom. And they are ever so happy.

Mushroom Moves
One day a mushroom walks into a bar and sits down. He starts talking to a woman, and he asks her, "Would you like to go out with me sometime?"
"I don’t know," the woman replies. "You’re not really my type."
"Ah, come on," he persists, "I can be a real fun-guy." 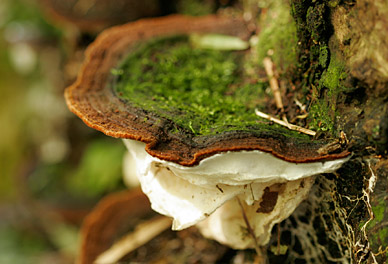