Of all our planet's major natural disasters – including earthquakes, volcanic eruptions, tsunamis, avalanches, and the like – a hurricane is the only one that provides fair warning to its distant victims.
"Hello! Here I am incubating off the coast of Africa," it calls to Caribbean islanders one bright and sunny September morning.
"OK, I'm churning up the middle of the Atlantic. Better take me seriously," it advises several days later.
"Hey, I'm really building up, and I'm heading straight for the Lesser Antilles. Time to stock up!" it warns ominously a week after it first forms.
"Look smart, Puerto Rico! I've just pulverized the island of Guadeloupe, and that didn't slow me down. Here I come. Batten down the hatches!"
Can you imagine a more polite disaster?

In the Olden Days
People didn't appreciate the politeness of hurricanes until scientists developed the technology to track them. Until relatively recently, there were no satellite photos or planes to fly into the hurricane's eye. The Arawak Indians described the hurricane's warning signs to Christopher Columbus, and he listened to them. On at least one occasion this knowledge saved Columbus' fleet from a watery grave. Lesser Antilles Islanders came to know that hurricanes were likely to strike during August and September. They would watch closely for the signs – a hazy sun, a light drizzle, an upswing of wind, and, most notably, the erratic, inland flight of the magnificent frigatebird, known on some islands as the hurricane bird.

What's in a Name?
The word "hurricane" comes from an Arawak Indian word. The Indians used the word huracán in conversations with early Spanish settlers. Later, the English adapted the pronunciation. Halfway around the world, in the Pacific Ocean, the same phenomenon is known as a "typhoon." That name merged Chinese and Arabic words. A universal term for this type of storm is cyclone.
For centuries Catholic islanders named hurricanes for the saint on whose day the storm fell. Some hurricanes were renamed after causing horrible damage. One especially violent storm that devastated virtually every island in the Lesser Antilles lives on in infamy as the Great Hurricane of 1780. In recent decades the names established by the World Meteorological Organization – Betsy, Beulah, Camille – have been universally adopted. Recently, names of both men and women are used alternately. You may hear of hurricanes named Anna, Bob, Cynthia, Donald, Esther, and Frank.

A Definition, Please?
A hurricane is a storm in which a vast system of clouds, heavy rains, and strong winds circle around a calm center. It originates in the warm waters of the tropics, then lumbers slowly across the ocean at speeds of 5 to 20 miles per hour (8 kph to 32 kph), spinning around a core of low atmospheric pressure. Although the whole storm moves slowly, the circling winds in the storm blow at speeds of 74 miles an hour (119 kph) in a minimal hurricane and up to nearly 150 miles per hour (241 kph) in the strongest storms.

How About a Picture?
Picture the worst storm you can imagine – dark, churning clouds. Rain falling in sheets so thick you can scarcely see your hands in front of you. Winds so strong that they bend young trees parallel to the ground. Houses fly apart. Leaves and branches are ripped off of strong trees, leaving barren trunks. Weak trees and plants are simply torn out of the ground. Great bursts of tropical rains drive flash floods down every crease and gully, carrying away anything loose: trees, houses, animals, and people.
The central core of the storm, in some cases almost 15 miles (24 km) in diameter, is called the "eye." In the eye the air becomes calm, clouds part, and patches of blue sky might appear. But the calm of the eye is only a tease. It gives hope to sailors and islanders that the worst is over. In fact, when the eye arrives, the storm is only half over. Some of the strongest winds begin to howl – from the opposite direction – as soon as the eye passes.

How Often?
Hurricanes are born of solar heating of the tropical ocean and winds driven by Earth’s spin, so hurricanes have been around as long as there have been oceans. A dozen or so hurricanes form in the Atlantic every year. A few of them are strong. They wander almost randomly across the sea, but they are so big and so frequent that any given island is hit by a large hurricane every few decades. Plants and animals in the Caribbean have had to adapt to the hurricanes just as plants and animals have adapted to forest fires in the American West. 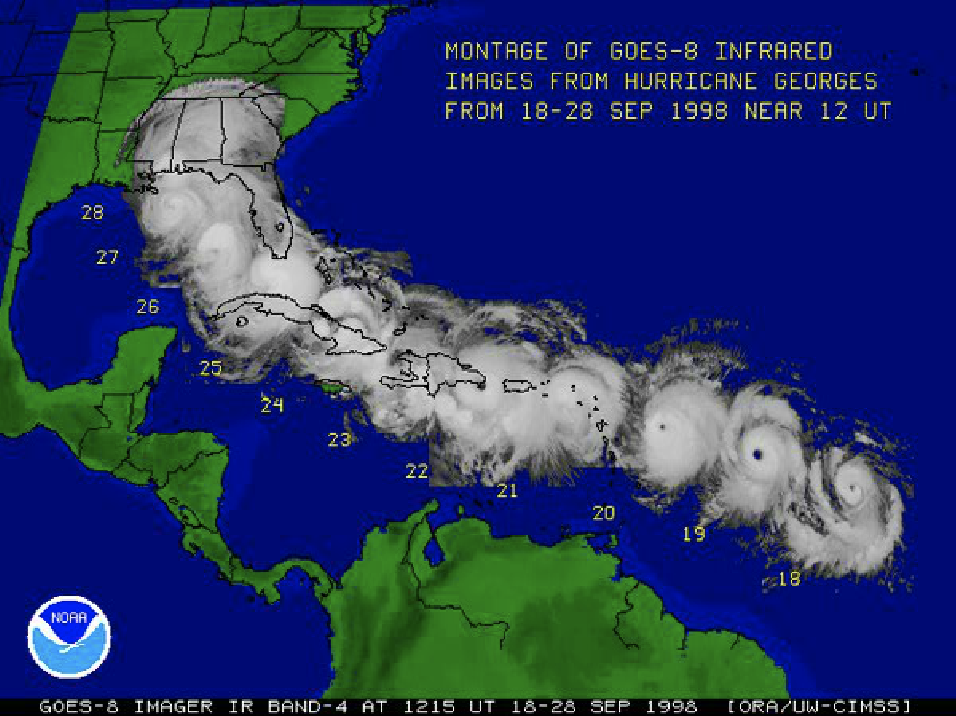 Figure 1. A montage of different images of Hurricane Georges taken as it wandered from the central Atlantic to the American coast. Image courtesy of National Oceanic and Atmospheric Administration/Department of Commerce. 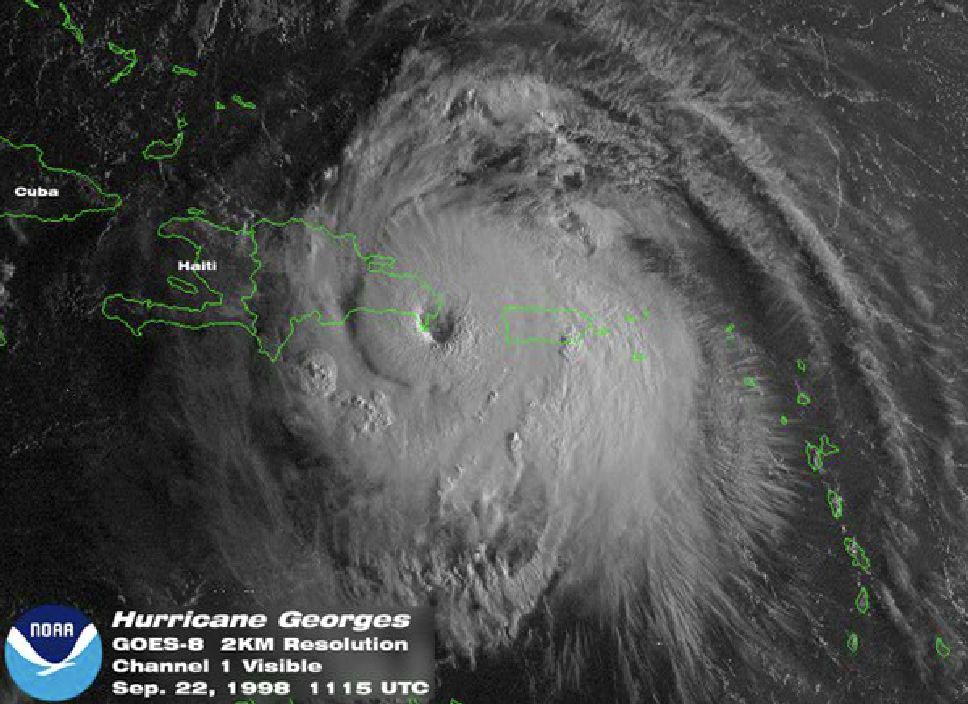 Figure 2. Composite satellite photograph of Hurricane Georges on Sept. 22, 1998, just after it roared across Puerto Rico. Spiral-shaped clouds circle around the large eye. Image courtesy of National Oceanic and Atmospheric Administration/Department of Commerce.